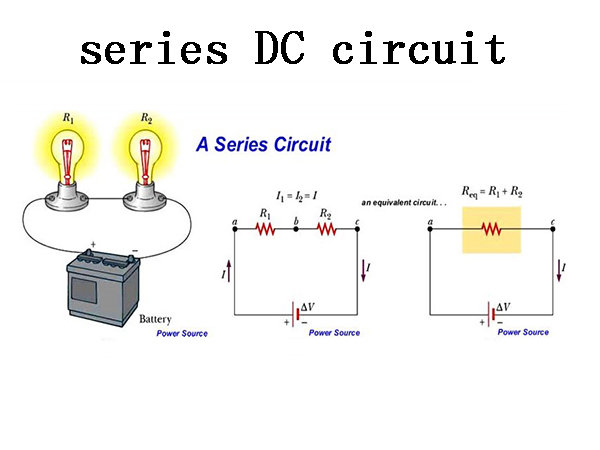 People often connect ordinary batteries and photovoltaic cells (solar cells) in series to increase the power supply voltage, and resistors in series can be used to reduce the current in the circuit, or as a voltage divider. The general power supply can be either DC or AC. The circuits described below all use DC power.

When measuring DC voltage with an analog voltmeter, it is very important to determine the polarity, otherwise the pointer of the meter will deflect in the reverse direction and even cause damage to the meter head. Similarly, when the components are connected to the circuit, if the polarity is wrong, it may also cause damage. For example, a battery has positive and negative poles. When connecting to a load, you must pay attention to the correct polarity to ensure that the circuit can work normally. The battery polarity symbols are marked on the casings of portable devices such as cameras, radios and mobile phones.
When measuring voltage, we always compare one point with another. In Fig. 7, point A is negative relative to point B, and point C is negative relative to point D.

⑦Measure the voltage to ground
The circuit in Figure 8 uses ground (Gnd) as the reference terminal. When making a measurement, the ground is at zero potential relative to the other points in the circuit. When measuring voltage in a circuit, one of the test leads of the meter is often clamped to the ground, and the other test lead is connected to the measured point in the circuit.

Assuming that in Figure 8, E is 75V, the voltage Va-b on the resistor is 25V, Vb-c is 25V, and Ve-d is 25V. If you connect a test lead of a voltmeter to Gnd, the voltage from point d to Gnd is 0V. The polarity at both ends of each resistor can be identified according to the direction of the current. The measurement results of the relative ground terminal are as follows: Va-Gmd is +75V, Vb-Gmd is +50V, Vc-Gmd is +25V, and Vd-Gmd is 0V. Please note that in this circuit, the voltage of the opposite ground terminal measured each time is a positive value.