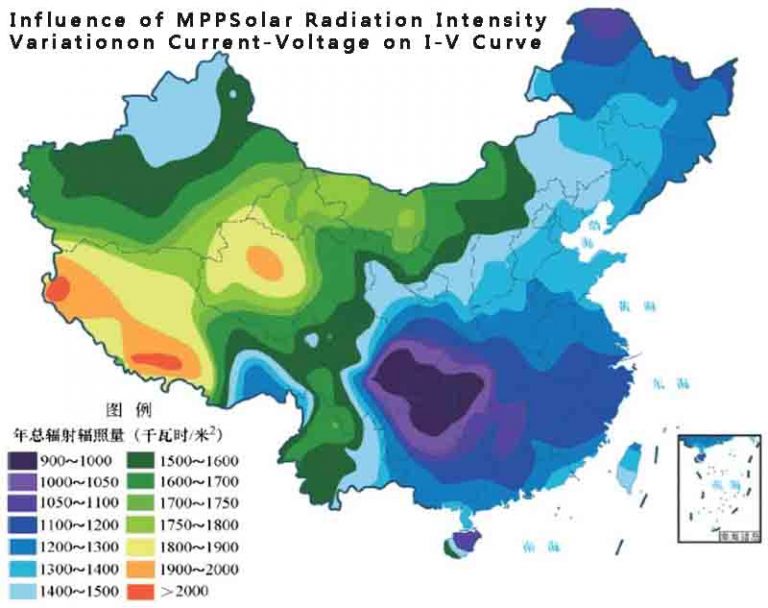 The power output characteristics of a photovoltaic device can be expressed by its current and voltage relationship. The manufacturer tests the product under Standard Test Conditions (STC) and draws a current-voltage graph. This I-V curve describes all the voltage and current values ​​of the device. In Figure 1, the intersection of the curve and the vertical axis is the maximum current (Isc) when the device terminals are shorted, at which point V=0. The intersection of the curve and the horizontal axis is the maximum voltage (Voc) of the device in open circuit, at which point I=0. The MPP is at the turn of the I-V curve.

Each point on the l-V curve corresponds to a certain current and voltage value, and the output power (P) of the device is determined by the I×V of the operating point. In Figure 1, if the device is operating at point A, the current (I) is about 9.7A and the voltage (V) is about 17V. therefore:

If the device is operating at point B, the current (I) is about 9.8A and the voltage (V) is about 13V. therefore:

Note that the curve is almost level before passing the “turn”, while the current drops sharply after passing the turn until it reaches zero at Voc. The voltage follows the curve, being zero at Isc and reaching a maximum at Voc. Point A is located at the turn of the curve and is the operating point of the maximum power of the device, that is, point A is the MPP of the device.

In order for a component or array to output the maximum usable power, it is very important to have it operate at the MPP. The MPP tracker can be used to track and maintain maximum power output to the load. When solar radiation intensity or temperature changes the MPP, the MPP tracker adjusts accordingly at the output of the module, changing the load and tracking the new MPP. For example, if the MPP tracker boosts the voltage at point B to 17V, the device can operate at the maximum available power. Using a controller to tune the MPP consumes some of the PV module’s current, which is used to drive the controller’s internal circuitry, but the current consumed is insignificant compared to the gain achieved.

Figure 3 shows the I-V curves of photovoltaic modules when the solar radiation intensity (W/m2) varies. As you can see, the current of the component changes, but the voltage remains almost the same.

Note that VMpp is constant as the irradiance changes, so the change in power is proportional to the current.

If the solar irradiance changes from one value to another due to shading or weather changes, the following two formulas can be used to calculate the current and power. These formulas are general, but are often used to calculate Isc and PMPp as the 1-V curve changes:

Read more: What is pwm?