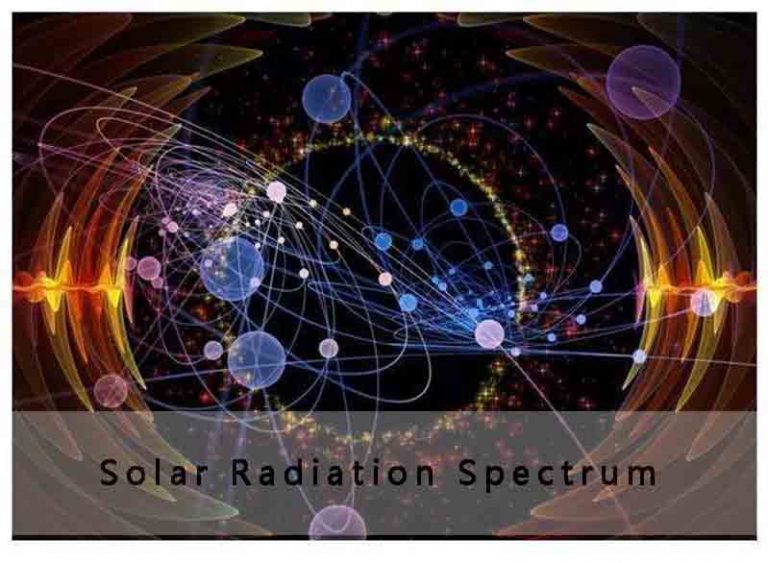 Sunlight that hits photovoltaic cells is transmitted in waves (imagine ocean waves), and sunlight consists of electromagnetic energy. The word “electromagnetic” means that sunlight energy consists of electrical energy and magnetic energy. There are many types of electromagnetic energy, and light energy is one of them. The solar radiation spectrum (see Figure 1) encompasses the energy range from ultraviolet (invisible) through visible light to infrared (invisible). These bands can also be described by the length of the wave, or wavelength. Wavelength is measured in nanometers (nm), and 1nm is equal to or 0.000000001m. 1nm is also equal to or 0.000000003281ft. The wavelength of visible light ranges from about 400 to 700 nm. The light that can be absorbed by crystalline silicon solar cells covers the visible light spectrum and extends into the near-infrared range, with wavelengths ranging from 400 to 1100 nm. The most intense solar radiation energy is located at about 550nm. Solar radiation is often scattered, reflected or absorbed by the atmosphere, and dust, water vapor, carbon dioxide, and many atmospheric pollutants reduce solar radiation intensity.

The voltage produced by a solar cell depends first and foremost on the material from which the cell is made and the temperature of the cell. The cell size (surface area) and solar radiation intensity (W/m2) have little effect on the output voltage. The current of the battery is proportional to its size and the intensity of solar radiation. The greater the radiation intensity (W/m2) on the surface of the cell, the greater the current produced.

Summary: battery cell voltage: the surface area of ​​the battery has little effect on it, and the solar radiation intensity (W/m2) has an effect on it when it is below about 200W/m2, and it has little effect after it exceeds. The voltage is basically constant at 0.50~0.60V. The battery material and battery temperature are the main factors that affect the voltage. For crystalline silicon cells, temperature is inversely proportional to voltage. When the temperature of the battery decreases (it gets colder), the voltage increases.

Cell current: The current of the battery is proportional to its surface area (m2) and solar radiation intensity (W/m2). Temperature has little effect on current flow. Designers must be careful and fully understand the specifications of the product. The characteristics of crystalline silicon are described above, but the temperature characteristics of thin-film devices are different (be sure to read the specification sheets for cells and components).

When the top surface of the cell is exposed to light, the photons absorbed by the PN junction transfer energy to the electrons of the material. Some of the electrons become free electrons, creating an electric current in the external circuit.

The output voltage and current of photovoltaic cells are very small, so multiple cells must be connected and packaged as a module. Under the test conditions, the open circuit voltage (Voc) of the crystalline silicon cell is about 0.5V. Figure 3 is an I-V curve of a module as a function of solar radiation intensity. The component is composed of multiple monomers in series, and its short-circuit current (when Voc=0) is about 0.51~2.6A. The current of the component is proportional to the solar radiation intensity of human exposure, so the output power (P=V×l) is proportional to the solar radiation intensity. Connecting cells in series can increase the voltage of photovoltaic modules, and connecting cells in parallel can increase the current of the modules. Usually the cells in the module are connected in series and then in series, parallel or series-parallel (see Figure 4). The series and parallel connection of photovoltaic cells and modules follows the same voltage and current rules as chemical cells.

Read more: What is a capacitor in an AC circuit?