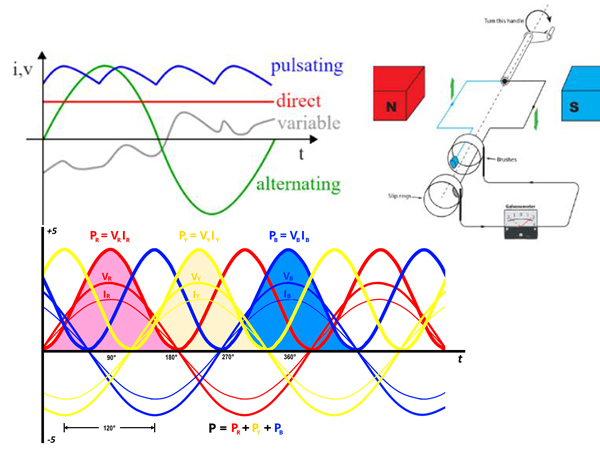 The three-phase transformer is used to increase the voltage to facilitate long-distance transmission, and then lower the voltage for power distribution. The coil windings and line configurations of these transformers vary according to different applications. Figure 2 shows two common three-phase configurations, namely “delta” (△-shaped) and “Y”-shaped configurations. The windings of each phase are respectively identified as A, B and C, and the space layout shall ensure that the phases are separated by 120°. The electrician connects the output of the secondary side to a three-phase or single-phase load.

The phasor diagram (see Figure 2) can show the angular displacement and amplitude of the waveform instead of the pure waveform. The arrows in the figure represent the angles between the amplitudes of voltage and current and each phase. This method is often used as a shorthand method to express important waveform information.

Figure 3 shows a transformer with a “Y”-shaped secondary winding connected to a three-phase 240V load.

②Advantages of AC
A significant advantage of alternating current is that it can be transformed into a high voltage or a low voltage by a transformer. When the voltage in the line increases, the current decreases in the same proportion. Smaller currents can reduce line losses, allowing the use of thinner transmission lines and reducing the construction and maintenance costs of the grid. We should understand that the same electric energy can be transmitted by high current and low voltage, or by low current and high voltage. E.g: