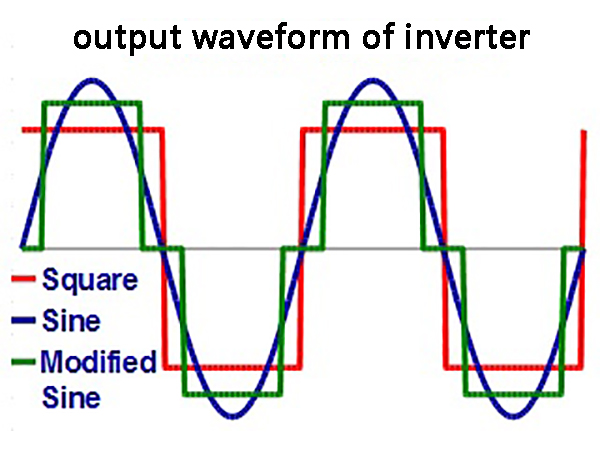 A square wave is not a sine wave, it is easily generated by an inverter. Square waves can be used to drive some resistive loads, such as resistive heaters and incandescent lamps. But square waves contain many high-frequency harmonic components that cause waveform distortion, cable and motor overheating, reduced power factor, and low power efficiency. Square waves are not suitable for powering computers and electronic devices, nor are they suitable for powering the public grid. In short, its use is extremely limited.

For connection to the public grid, the selected equipment must comply with Institute of Electrical and Electronics Engineers (IEEE) Standard 1547, UL1741 and all local codes. IEEE and UL certifications will be indicated on the inverter nameplate. Standards are regularly updated, and designers must adhere to current requirements when designing systems. Many states and utilities have issued lists of “Tested and Approved Models,” documents that approve devices that are allowed to be connected to the grid.

Power companies use rotating alternators, which are designed to be grid compatible and capable of producing high quality sine wave power. A sine wave inverter that meets the relevant approvals can be used in grid-interactive applications. Grid-tied inverters are called grid-interactive inverters and are able to meet the strict regulations of the grid. They have a total harmonic distortion of less than 5%, can be automatically disconnected from the grid when the grid loses power, and reconnected when power is restored. Grid-tied inverters have excellent voltage and frequency stability and high power factor to maintain phase and frequency synchronization with the public grid.

Wind turbines can drive small AC or DC generators (see Figure 2). Such devices are capable of outputting DC power to an inverter, which is then fed into the grid. Wind turbines can be combined with photovoltaic systems to form a hybrid system.

Figure 3 shows the outline of the inverter.

The maximum continuous AC output current value can be seen on the inverter’s nameplate, which is determined by the maximum rated power and minimum AC voltage (see Figure 4a).
IAC@208V=P/V=5000/208=20A

In Figure 4a, the rated continuous power is 5000W. Therefore, the DC input current of the inverter is limited to about 20A, and the output current of the photovoltaic array is also limited to 20A. If the rated power is exceeded, it is likely to cause damage to the inverter. Semiconductor devices are sensitive to changes in temperature, and when the current increases, so do their power and temperature. We can reduce the temperature of the inverter by reducing the output of the PV array. If the operating point is shifted to the right of the maximum power point (towards Voc), the output power of the PV array will decrease. The inverter uses temperature sensors to monitor temperature and adjust the operating point for power management. The power switching transistors are mounted on a heat sink, which helps dissipate heat into the air. (Note: The CEC efficiency in Figure 4a is a standard promulgated by the California Energy Commission, referring to average efficiency rather than peak efficiency. Device efficiency will vary depending on output voltage, which will be indicated on the nameplate.)

It is important to understand that the output current of an inverter depends on its power rating and the voltage supplied to the load. The continuous output current of the inverter must meet I=P/E. For example, if the continuous current required by the load is 25A and the voltage is 120V, the minimum power rating of the PV array and inverter must be 3000W (120V x 5A), and the actual rating will be higher to accommodate temperature changes. incoming voltage rises. The rated AC current defines the load current and the available grid current. If the output current exceeds the rated value of the inverter, the inverter will be damaged. When supplying current to the grid, the load is no longer a factor because it is impossible for the inverter to supply more current than the rated current of the power supply and the inverter. The grid can take in all the current the system can supply. The characteristics of this grid-connected system improve the efficiency of the entire system, and because it does not require battery packs, it also reduces the maintenance cost of the system.

In Figure 4a, the input voltage range is DC250~500V, and the output is AC208V/240V/277V. Inverters are more efficient at higher voltages because less current is drawn, so voltage drop and heat generation are lower. The input voltage of the inverter comes from the output of power sources such as battery packs or photovoltaic arrays and wind turbines. Smaller systems output less power and supply less current and voltage to the inverter, while larger power systems supply more current and voltage to the inverter. If the output power of a PV array is 5000W, the input of the inverter may be 250V, 20A or 350V, 14.3A, both parameters can output power of 5000W, but the current of 14.3A has a lower voltage drop on the cable . The input parameters of the inverter configuration are a function of the rated output. If the input is below a certain value, for example below the specification parameter, the inverter will not work. The output value can be selected according to the application. Most domestic electrical loads use single-phase AC120V/240V, while commercial applications use higher voltages and have single-phase or three-phase loads. From a system design point of view, an inverter with a larger input range is more advantageous.

example
A home uses a photovoltaic array and battery pack to power a summer house (see Figure 5). Its load includes lamps, televisions, water pumps and two multifunctional sockets. After calculation, the load is AC120V, 2300W. Please determine the system configuration and inverter requirements for this application.

This is a smaller system that uses a photovoltaic array to charge a battery pack, which is then fed to an inverter. The furnace and water heater run on propane gas and use a generator to provide backup power. The inverter can automatically start or stop the generator as a supplementary power source. If this automatic function is not required, it can be controlled with a manual toggle switch. In this system, the photovoltaic array should be selected according to the battery charging voltage and current requirements and the function of the charge controller.