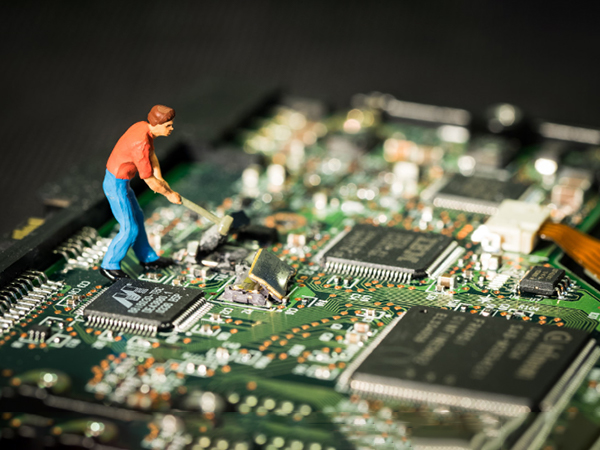 Technicians and electricians often need to troubleshoot faulty systems. Two common faults are open circuit and short circuit. Ammeters, voltmeters and ohmmeters are often used to isolate and troubleshoot these faults. Because the circuit structure is different, the fault phenomenon also manifests differently.
①Open circuit fault inspection
A common electric power systems failure is an open circuit (also called an open circuit). The cause of the open circuit is usually that the component is blown out due to overheating or the connection between the components is loose, causing the current path to be disconnected.

Example 1
As shown in Figure 1, there are three bulbs in series in the circuit. When all the light bulbs were glowing, they all went out suddenly. Use one ammeter and four voltmeters to measure, the readings are as follows:
Ammeter: 0A.
Voltmeter: V1=0V, V2=36V, V3=0V, V4 (melt)=0V.
Some inexperienced electricians may determine that the second bulb is normal, and the other bulbs are broken. Now let us analyze the measurement results: the ammeter measured 0A, so the circuit is in an open state, as if a light bulb or melt has blown out. The voltage on the second bulb is 36V, which is equal to the power supply voltage, which shows that there is a potential difference across the second bulb. The voltages on other bulbs and melts are all 0V, indicating that the voltages at both ends of the filaments and melts of other bulbs are equal, so there is no damage. After replacing the second bulb, all the bulbs turned on.

When testing a circuit containing series elements (series circuit), the voltage across the open element is equal to the power supply voltage. If an ohmmeter is connected across each element, the open element will display an infinite resistance value, while the normal element will display a certain resistance reading. The resistance of the melt is zero ohms (note: please disconnect the power before using the ohmmeter).

Example 2
In Figure 1, there is only one series path for current to pass, while in Figure 2, three bulbs are connected to three independent (parallel) current paths. When all the bulbs were on, the second bulb suddenly went out, but the first and third bulbs were still on. Use four ammeters and three voltmeters to test, the readings are as follows:
Ammeter: AS (power supply) =24A, A1=12A. A2=0A, A3=12A.
Voltmeter: V1=36V, V2=36V, V3=36V.
Since A2=0A, it indicates that the current path is broken, which is most likely caused by damage to the bulb. Because bulbs 1 and 3 are still on, these two paths are normal. Because the circuit is disconnected and does not affect the power supply voltage, and the power supply supplies power to the three paths, the voltage measured by the three voltmeters are all 36V. The problem can be solved by replacing the second bulb.

Compared with series-connected bulbs, the parallel method has an advantage, that is, if one bulb burns out, the other bulbs can still be lit. When detecting the open circuit fault of the parallel circuit, the current must be measured. The path with a reading of 0A may have component damage or poor contact failure.

When detecting an open-circuit fault of a series circuit, it is best to measure the voltage. The voltage across the faulty component is the power supply voltage, see Example 1. Such failures can be confirmed by measuring resistance with an ohmmeter (the power should be disconnected before measuring with an ohmmeter).

② Short-circuit fault inspection
When the conductive terminals of the wires or components that should be isolated touch together, a short circuit occurs. At this time, the current increases due to the decrease in resistance, which often causes the circuit breaker to work or the fuse wire is blown (open circuit). An ohmmeter can be used to determine the location of the short-circuit, and the burnt insulation layer or burnt traces on the printed circuit board can also be found by visual inspection. You can use the ohmmeter to detect and isolate the circuit from such a place. A short circuit will exhibit a resistance lower than normal or zero resistance. This fault is more difficult to detect than an open circuit fault (remember, you should disconnect the power supply before measuring with an ohmmeter).
Note: The fault diagnosis case given in the above example only contains one fault. If there are multiple faults in the circuit or system, it is necessary to comprehensively use a variety of means to troubleshoot.