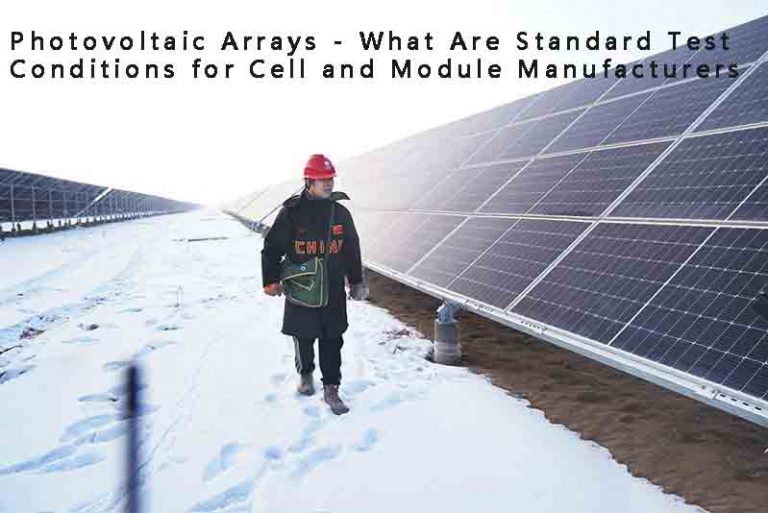 Manufacturers test units and assemblies under Standard Test Conditions (STC). These tests are used to characterize the output of the unit/assembly and use the test results to draw an I-V curve. Commonly used STCs are:

(1) The solar radiation intensity (irradiance) is 1000W/m2.
(2) The monomer temperature is 25℃
(3) The air mass is AM1.5 (see appendix of this book).
According to UL certification requirements, the test results should be marked on the nameplate of the module. A typical nameplate is shown in Figure 1.

However, the field environment is rarely exactly the same as the STC, so manufacturers develop PC software to correlate the STC to the specific conditions of the field. Figure 2 shows the photovoltaic array powering a weather station.

Components often need to be tested in the field before final installation. Conversion efficiency refers to the percentage of solar energy irradiated on photovoltaic cells/modules converted into electrical energy. There are many factors that reduce conversion efficiency. There are factors related to the efficiency of the monomer and the absorption of different wavelengths of light that are difficult for field installers to control. But some factors, such as the connections between components, shading of panels, cleanliness and reflections, are conditions that can be controlled on-site.

The energy received by the panel must first be measured (W/m2) and recorded. The component’s load resistance is then gradually increased from a short-circuit to an open-circuit state, voltage and current measurements are taken along the way, and these measurements are used to draw an I-V curve. The point of maximum power is at the turn of the curve. Energy conversion efficiency is the percentage of converted electrical power to incident power.

Read more: What is Inrush Current and Charge Controllers?