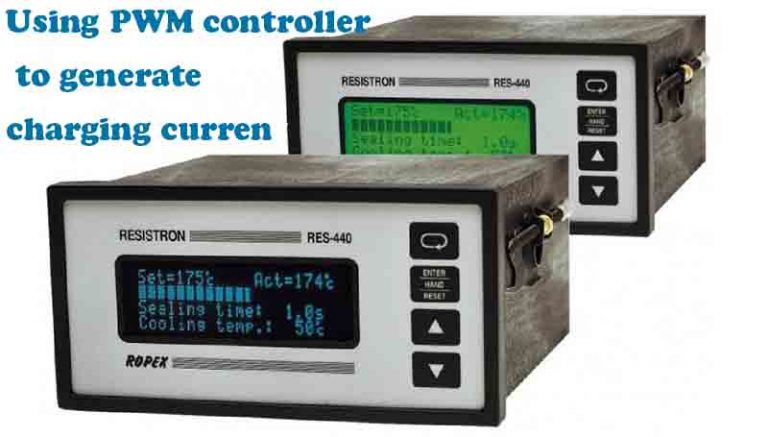 Linear regulators are usually used in low current applications. When the current is larger, the voltage drop across the series devices also increases and the efficiency of the regulator decreases. The power is the product of V and I, and the calorific value of the regulator is also larger at this time.

As mentioned earlier, PWM controls the amplitude by changing the pulse width of the current or voltage. When the pulse is narrowed, the charging current decreases, and when the pulse is wider, the charging current increases. The high-frequency pulses generated by the PWM module go into a digital-to-analog (D/A) converter, which converts the high-frequency digital pulses into a stepped analog output voltage whose amplitude varies in the same way as the output of the linear regulator. similar.
In Figure 1, the D-A converter can output a linear charging current.

PWM is an efficient method of controlling the charging current with very little power loss of its own compared to linear regulators or on-off switching regulators. PWM devices are more expensive, but they are efficient and can regulate current in a more progressive manner than on-off regulators.

Now, three methods of adjusting the charging current have been introduced, which are as follows: ① The on-off of the shunt switch generates a series of current pulses, which are used to charge the battery. The charging current provided by this method is a non-linear current pulse; ② The shunt switch is replaced by a linear device, and the charging current is smoothly and linearly reduced or increased through the change of resistance; The frequency pulses enter a digital-to-analog (D/A) converter, and these digital inputs are then converted into a “staircase” current output waveform, much like a linear regulator. PWM current regulation is more efficient (less power loss) than linear device regulation, and the output current is smoother than pulsed shunt switching regulators.

There are many types of general purpose controllers to choose from. For example, a charge controller with MPPT function, rectification function, or DC-DC conversion function, etc. The inverter can also have DC-DC conversion, MPPT, PWM and transformer functions, and can provide different load voltages. These functions can be controlled by software, and the specific software can be stored in different storage media. This information should be noted in the specifications or in the operating instructions.

For example, a wind turbine may face varying wind speeds. A wind turbine equipped with an alternator processes the changing voltage and then outputs a constant voltage. In a common configuration, the system first uses a rectifier to convert the alternating current to a relatively constant direct current. This direct current is then converted into stable low voltage direct current, which is then regulated by a charge controller for charging the battery, or inverted to high quality alternating current for local loads. In some applications, critical loads are isolated and the grid or generator is used for backup power. The way these systems are configured requires corresponding charge controllers and inverters to meet the design requirements. The different applications are described earlier in this chapter. The interactive grid-connected system shown in Figure 2 uses a wind turbine as a power source and has a backup battery.

Designers can select controller features such as indicator lights, switches, circuit breakers, fuses, and other control functions as needed. For the charge controller, the following functions should be considered:

1) Low Voltage Disconnect (LVD) function, when continued discharge will damage the battery, the load will be disconnected immediately.
2) High Voltage Disconnect (HVD) function, which is a function in charge regulation (see parallel and series regulation principle).
3) The temperature sensor is used to monitor the ambient temperature and automatically adjust the charging set value.
4) RS232 interface for communication with PC.
5) MPPT and DC-DC converter.

Read more: What are DC and AC waveforms?