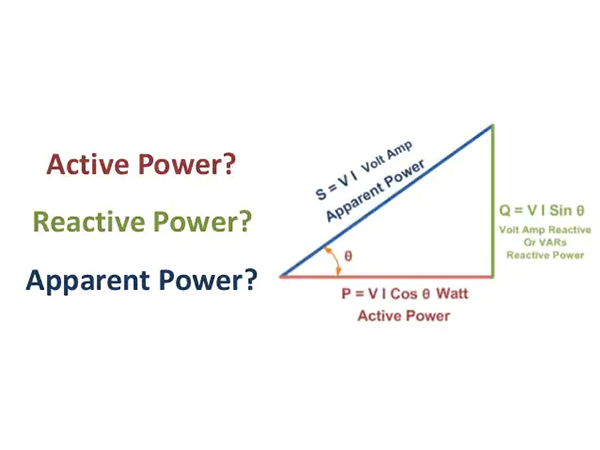 In electrical research, there are three basic forms of power, namely: active power, reactive power and apparent power.
Active power (P or PTRUE) is the power consumed by the resistive element in watts. For example, the energy converted into heat or power is generated by active power.

Reactive power (PVAR) is the power used to generate a magnetic or electrostatic field. The energy is first stored in the circuit and then returned to the circuit. Reactive power is generated by capacitors or inductors, and the unit is “Var (VAR), that is, volt-ampere reactive power.

In a circuit containing only one capacitor, the phase difference between the voltage and the current is 90°, and the current leads the voltage. Energy is stored in the capacitor for part of an AC cycle and returned to the circuit at another time in the same cycle. If the product of voltage and current is added in the entire cycle, the negative reactive power and the positive reactive power are equal in number, so the total power is zero.

Example 2
A resistor and a capacitor are connected in series, as shown in Figure 4. The resistor is 60Ω, Xc is 30Ω, and the power supply is AC120V. Calculate Z, IT, P, PVAR and PVA, and draw a schematic diagram of the power triangle.

(As mentioned earlier, the apparent power can also be calculated by √(P²TURE+P²VAR).)
The power triangle is shown in Figure 5.
Example 2 moves the power curve in Figure 3 to the positive direction, reducing the part of the curve below the zero axis. This is because the angle between voltage and current is not 90°, so the active power increases. The power curve is very useful when counting electricity production or electricity consumption over a period of time.

(7) The power triangle is shown in Figure 7.

(7) The power triangle is shown in Figure 9.