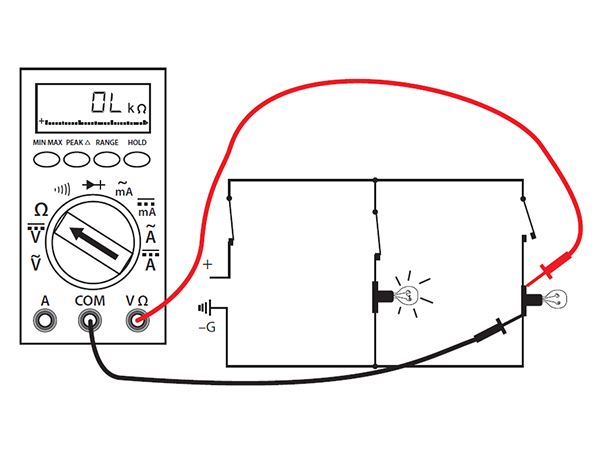 As mentioned earlier, resistance hinders current flow. The unit of resistance is Ω, which is measured with an ohmmeter (also called a resistance meter). The ohmmeter has its own power supply, usually a battery. When using an ohmmeter, the power supply of the circuit under test must be disconnected, because the battery of the ohmmeter will apply voltage to the component under test. The ohmmeter can be analog or digital, and each meter will be calibrated to measure resistance from zero (short circuit) to infinity (open circuit). Figure 4 shows the measurement of resistance with a digital multimeter, while Figure 2-22 shows the ohm scale of an analog multimeter.
Figure 5 shows the scale of an analog ohmmeter. The ohm scale can be expanded to R×1, R×100, and R×10000. If the range selection switch of the ohmmeter is set to R×1, the reading in the figure is 150Ω×1, which is 150Ω. If the range switch is set to R×100, the reading in the figure is 150Ω×100, which is 1500Ω. The scale of a multimeter usually has many uses. For example, the scale used to measure voltage or current may be a little unclear. Therefore, when using an unfamiliar instrument, it is best to read the manual first.

Before using the ohmmeter, it should be calibrated first. Touch the metal parts of the two test leads together, and the meter head should read 0Ω (short circuit). After separating the test leads, the reading should be infinite (open circuit). The analog meter can be adjusted to the zero position, but the digital meter cannot be adjusted. The zero position should be adjusted in time after changing the range of the analog ohmmeter. If the calibration reading is incorrect or the meter cannot be adjusted, it may be because the battery voltage is too low. You should replace the battery and perform the calibration again.
The meter discussed here is a common multimeter. The meter can measure current, voltage and resistance, both analog and digital. When using it, care should be taken to select the appropriate function and range. All the features of the instrument will be introduced in the operation manual. Note that 0Ω is located at the far right end of the ohm scale line, and infinity is located at the far left end.

Precautions
It is forbidden to use an ohmmeter in a live circuit. The ohmmeter can only be used for resistance measurement in a de-energized circuit. If the line is not powered off, the ohmmeter may be damaged because the ohmmeter has its own power supply.
Steps to measure resistance in complex circuits (see Figure6):
1) Open the switch (cut off the power on the resistor).
2) Disconnect the connection between RA and RB.
3) Measure and read the resistance values ​​of RA, RB and RC.
The circuit must be de-energized before measurement. In order to obtain correct readings, the resistor needs to be isolated from the load. Disconnecting the resistors RA and RB can prevent them from forming a well-connected relationship and affecting the measurement (the parallel connection of resistors will be introduced in the following section). As shown in Figure 6, connect the test leads to both ends of each resistor for measurement. The disconnected switch isolates the power supply from the meter. After the resistance RA and RB are disconnected, when the electric pen touches the measured resistance, the current from the ohmmeter only flows through one resistance, thus ensuring the accuracy of the measurement.