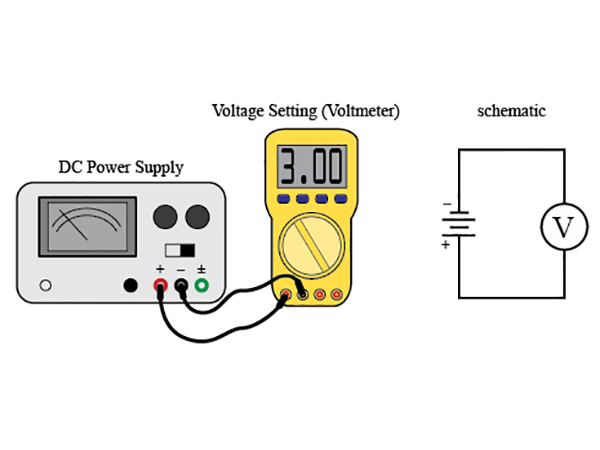 The voltage produces the power that pushes the current through the conductor, and its unit of measurement is volts (V). Figure 1 shows a 120V voltage source whose “pressure” can push current through a light bulb. Voltage is like the pressure of a water pump in a hydraulic system. In a hydraulic system, the pressure generated by the pump drives the flow of water, while in an electrical system, the voltage drives electrons. The voltmeter is in the water pipe, although water does not necessarily flow, but the water pressure still exists: in the circuit, although there is no current, there is still voltage at both ends of the power supply, and the current is not equal to the voltage. Please note that the switch in Figure 1 is off and the current is zero, so no voltage can be measured at both ends of the negative teaching, but 120V can still be measured at both ends of the power supply.
Voltage is also called electromotive force (EMF or E). The capital letter V or E is commonly used to indicate the voltage of the circuit or power supply, and the capital letter I is used to indicate the current.

The magnitude of the voltage from one point to another is equal to the work done by a unit positive charge moving from one point to another due to the force of an electric field. The direction of the voltage is defined as the direction from a high potential to a low potential. The charge q moves from point A to point B in the electric field. The ratio of the work done by the electric field force to the amount of charge is called the potential difference (voltage difference) between the two points AB, and this voltage difference is called the voltage drop. Voltage drop is the value of voltage required to drive current through the resistor. The method of calculating the voltage drop is to multiply the current (I) by the resistance (R), that is, V=I×R, which is consistent with the formula of Ohm’s law. When the circuit has two loads, the voltage (E) must be high enough to drive current through all loads. An important circuit law is that the sum of the voltage across load 1 and load 2 is equal to the power supply voltage E.

③Voltmeter
A voltmeter (also called a voltmeter) is used to measure voltage. As shown in Figure 2, when measuring voltage, you need to connect the meter pen of the voltmeter to both ends of the load, that is, connect the voltmeter in parallel with load 1 or load 2. This is completely different from the measurement method of series ammeter and load in series.

In Figure 3, the voltmeter shunts a small amount of current (Im) from the power supply current (Is) that should flow through the load. As a result, the load current (IL) is reduced by these shunt currents. If the ohm per volt of the voltmeter is larger, the IM will be reduced, and the load effect that affects the work of the load will also be reduced. In Figure 3, if Is=1.000A, IM=0.005A, the load current will be reduced to 0.995A (IL=1.000-0.005=0.995A). Figure 4 shows a digital multimeter with a digital display, and Figure 5 shows an analog multimeter.