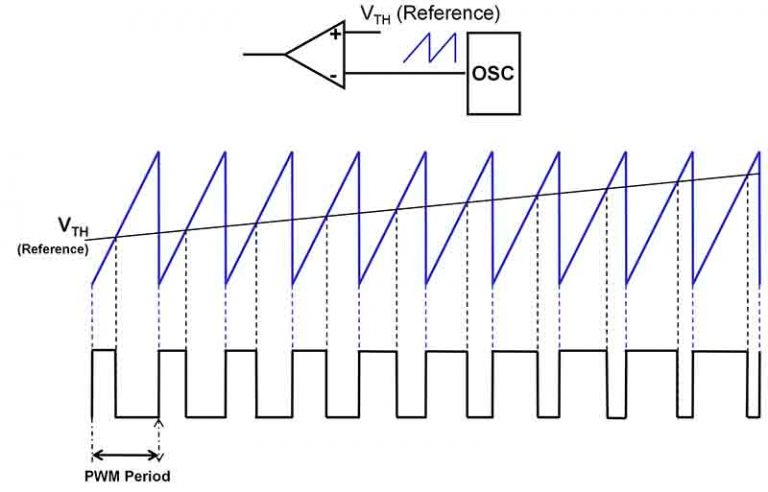 Inverter is an important equipment of the renewable energy system we discussed. Most sine wave inverters use pulse width modulation (PWM) technology to generate sine wave output. When discussing the inverter, you can refer to relevant technical data. System designers, technicians and installers should understand the working principle of DC-AC inverter. A PWM inverter is introduced here.

PWM can be used to generate high-quality sine wave, and a variety of design schemes and technical types can be adopted in specific design. Integrated circuits using embedded functions, analog circuits and hybrid design of analog circuits and digital microprocessors have been used in inverters. The inverter can generate a series of variable width pulses with different shapes and duty cycles, and finally provide the load with a waveform with pure sine wave characteristics.

In order to make the output of PWM circuit drive the load, it is necessary to design the driving circuit. Figure 2 shows the driving circuit of an H-bridge structure. H-bridge switches usually use high-voltage thyristor rectifiers or field-effect transistor devices to connect the output waveform with the load. The table below figure 2 lists the switching state when the voltage is applied to the load. In Fig. 2, these switches are represented by the symbol of mechanical switch, and G is the control end for opening or closing the switch. Semiconductor switches have higher reliability and lower power consumption than mechanical switches, so mechanical switches are no longer used in modern inverters. The positive half cycle of the waveform can be generated by turning off the switch (HL) in the upper left corner and the switch (LR) in the lower right corner; Turning off the switch (HR) in the upper right corner and the switch (LL) in the lower left corner can produce the negative half cycle of the waveform. PWM and H-bridge can produce high-quality sine wave, and its driving output ability is stronger than the reference sine wave shown in Figure 1.

These switching devices need to switch the control signal. According to different designs, the control signal can come from the outside or inside of the inverter module. The switching control of H-bridge is called line commutation or self commutation. The line commutation control is located outside, and the switch (commutation) is controlled by the grid connection signal. In such occasions, thyristor (SCR) switch is usually used. The self commutation control is realized by the microcontroller inside the inverter module. The line commutation control can automatically synchronize the output of the inverter with the power grid. The self commutation control adopts a complex algorithm for synchronous control, which is better for the control of output frequency and power factor. The principle of single-phase control, while the three-phase bridge includes another set of power switch, the third power bus, three-phase filter and triangular or Y-shaped transformer. The H-bridge in this example is self commutating, and its switch is field effect transistor (mos-fets) or insulated gate bipolar transistor (IGBTs). Self commutated inverter can be used for grid connected or non grid connected H-bridge. The switching sequence is controlled by the modulated waveform to produce positive or negative changes of sine wave. The low-pass filter makes the basic frequency component pass through the load and blocks the high-frequency harmonics.

Now let’s talk about the work of sine wave inverter in photovoltaic system: the output of photovoltaic array is DC. With the change of solar radiation intensity and array temperature, its output voltage and power will also change. The output of the array enters a DC-DC converter, also known as the maximum power point (MPP) tracker. The MPP tracker can adjust the array load so that the array can output the maximum available power. This process is realized by adjusting the array voltage and transferring the maximum power to PWM equipment. PWM equipment generates sine wave, which contains harmful harmonics, which can be eliminated by filter. The transformer will change the voltage amplitude to meet the needs of the power grid and other AC loads. The output voltage of the inverter is slightly higher than the grid voltage in order to transmit current to the grid.

The interactive grid connected system needs to use sine wave inverter. Note that the sine wave crosses the zero axis instantaneously, thus improving the operation and accuracy of some loads, such as electronic timers. Harmonic distortion is minimized in sine wave, but it still exists in a large number in modified square wave. Sine wave inverter has more electronic components, memory and high-efficiency switches.

Modern inverters use the most advanced triodes, field effect transistors, thyristors and integrated microprocessors. The power consumption of these devices is very low, which is conducive to maintaining the high efficiency of the inverter. The peak power efficiency of high-quality inverter can reach 92%~96%. When outputting electric energy to the power grid, the interactive grid connected inverter must match and synchronize the output frequency, phase and amplitude with the power grid. The inverter is controlled synchronously through electronic equipment. The voltage and current are in phase, which means that the resistive power factor is close to 100%. A power factor less than 1 means a waste of reactive power and energy. A photovoltaic array is synchronized with the power grid while keeping the current and voltage in phase. The output voltage should also be transformed to meet the requirements of the power grid. When the current and voltage are in phase, the power factor is 1. However, the power factor of an independent non grid connected system will be subject to the type of local load.

Read more: how efficient is the inverter of renewable energy electrical technology?